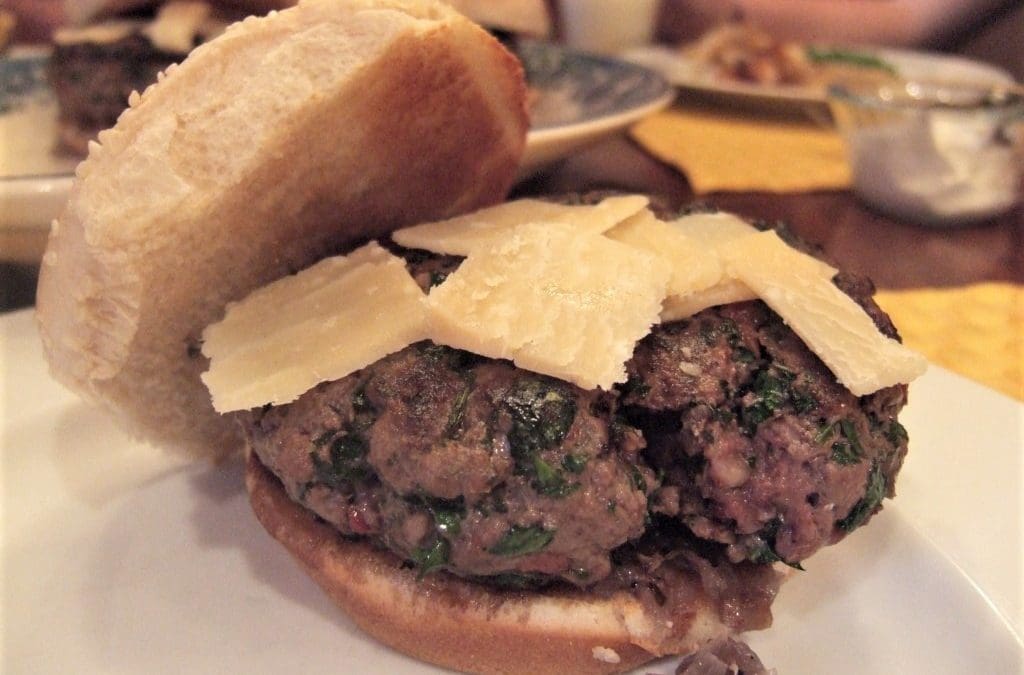 As you may recall, hamburgers are one of the very few things I need to be happy.  And I typically don’t like “fancy” burgers. I suspect it must be powerfully tempting to mess with the basics, especially if you’re a restaurateur and want your burger to get noticed in a city like Paris (or Chicago), but I don’t think truffles or aioli or Kobe beef make a better burger. Having said that, I liked this burger despite the fact that it IS messed-with and fancy. I think it’s because I chose to think of it not as a hamburger but more as a kind of small steak on a large crouton.

This recipe represents an attempt by an accomplished contemporary French chef to create something that would be recognizable as the iconic American food that it is, and yet still appeal to the French palate.  So in go cornichons, capers, tarragon and an onion marmalade (which I liked a lot, despite the fact that mine was a disturbing grey color).  Parmesan obviously isn’t French but it’s EU and who doesn’t like Parmesan cheese?  The more I think about it, the harder it is to believe that the French didn’t invent the hamburger.  The notion of transforming a (usually) cheap cut of meat into something yummy and desirable — and on bread, for crying out loud — just seems so French to me.

In reading Dorie’s introduction to this recipe I learned that hamburgers have attained a kind of frenzied popularity in France of late and that various interpretations can be found in restaurants haute and not-so-haute.  This article from 2008 provided an interesting assessment of the trend.  My favorite?  The French have indeed embraced hamburgers but can’t quite bring themselves to eat them with their hands.  Vive la difference!

Here is more information on Salle Playel (and it’s well worth reading about).