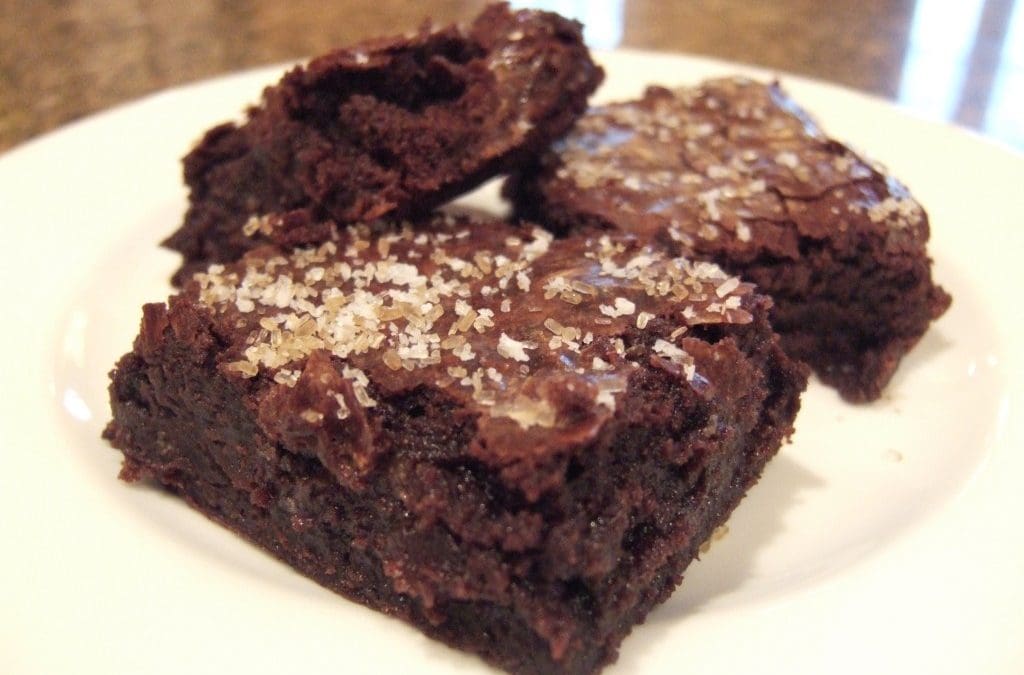 My dear friend Susan (of kugel fame) was just telling me that she does not like this trend of salty+sweet. She also doesn’t like things like cayenne pepper in her chocolate dessert. Just can’t get into this particular culinary movement. What can you do, the heart wants what it wants, no?

I, however, love it. I love a little salt with my sweet, maybe even a little more than a little. If I were searching for a dessert on Match.com I would totally email these brownies. Or text them. Or whatever one does. I haven’t dated since 1992 so I’m a little out of the loop.

These are the world-famous Baked brownies but with the addition of a layer of salted caramel in the middle (and trust me: they ain’t kidding when they tell you to watch the caramel closely while it’s cooking. It will go from syrup to 911 in the time it takes you to let the dog out the back door). You also sprinkle more fleur de sel and some “coarse” sugar on top when they come out of the oven.

Mine took a good bit longer to cook than the 30 minutes specified in the recipe. Probably closer to 40. And they were still very, very moist in the middle so I know I didn’t over cook them.  The caramel melted into the brownies rather than remaining a distinct layer. I don’t know if that’s what’s supposed to happen or not. I forgive them either way.

What is it about the salty/sweet thing that’s so appealing? Obviously, salt acts as a flavor enhancer but typically what you’re after in sweets and baked goods is just that and no more. But lately we’re letting salt assert itself a little more and have equal billing with the sweet components. Maybe salty and sweet are not mutually exclusive but we’ve just set it up that way.

Even if you find this all a little suspicious I encourage you to try these brownies.  They are fudgy vs. cakey (my personal preference).  They are possibly denser than Tungsten and much more appetizing on a dessert buffet.  The caramel alone is worth making and there will be extra (and yes, it is inappropriate to eat spoonfuls of caramel for lunch.  If someone sees you).  They are seriously spectacular.

The authors of Baked have asked that we bloggers post no more than 3 recipes on our site so I am going to pace myself and not post this one.  To tide you over here is the recipe for the original Baked brownies.  Enjoy!