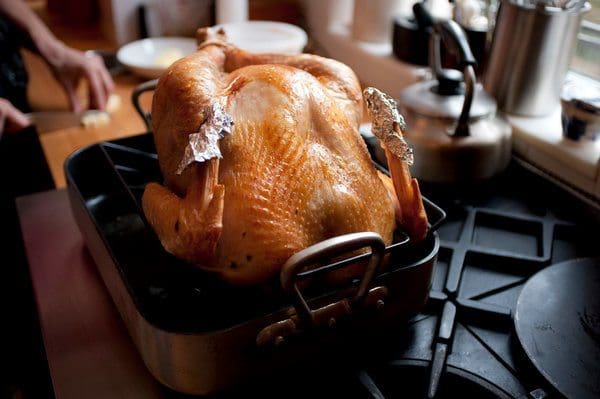 I think I’m done searching for the be-all and end-all turkey.  Right here, this is it.  Probably the best turkey I’ve ever made and I’ve made a few.  I was a devotee of Cook’s Illustrated’s wet brine for many, many years and it was a great recipe (I always followed the brine with an air-dry to ensure crispy skin).  Last year I tried a spatchcocked turkey which was also delicious.  But this one?  I just don’t know what else you could ask for in a turkey.

And let me anticipate your concerns: no, it does not result in a super-salty bird.  Nor does it make super-salty gravy or inedibly salty stuffing.  I’m way too impatient to read about the science of dry-brining but what I suspect happens is that the salt (which is applied two days before cooking) is absorbed into the meat and combines with the water already in the bird and is dispersed by molecules.  Or atoms.  Drones!  Something.  The point is: it’s magic.

I followed the instructions until I got to stuffing the cavity with an onion, an apple, and some herbs because I am willing to risk my health and that of my family for in-the-bird stuffing.  I just am.  I also did not cover the wing tips with foil, but tucked them behind the bird before he went into the oven.

My 12.5-lb. turkey took about 2 hours and 45 minutes to cook and was a resplendent success. And now, I’m off to make the world’s best turkey sandwich.