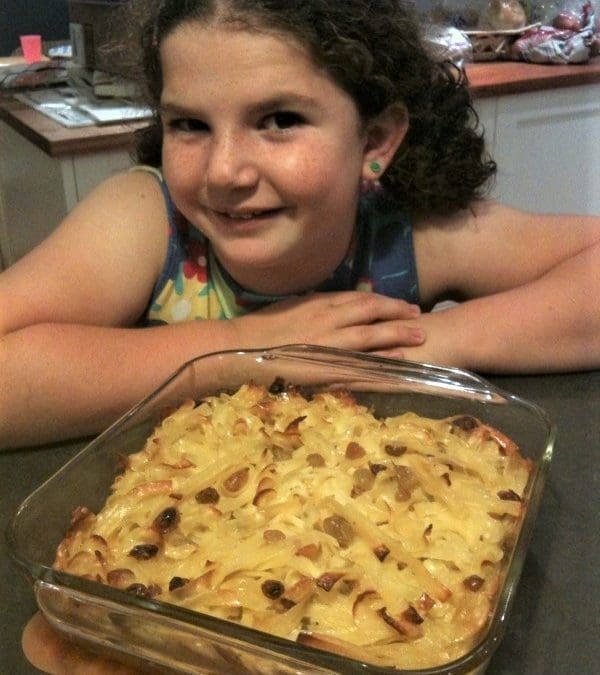 Susan has been my friend since high school.  We were co-editors of our high school paper (in fact I was tickled to see that she ended this recipe with a “-30-“) and then went to the same college.  Since that time our lives have taken us in different directions and Susan now lives in Vermont with her husband, Ken, and two sweet-as-kugel children: Benjamin and Sonia.  Susan posts the most beautiful pictures of her life in the Green Mountain State on Facebook and I tease her that she’s living in a Robert Frost poem.  I treasure having Susan in my life and am delighted to count her among my friends.  And apparently she makes a killer kugel — who knew?

So here is Susan’s Grandmother Addie’s Kugel and some background from Susan.  Oh, and Shanah Tovah to all celebrating the new year this week!:

Rosh Hashana begins a new year in the Jewish calendar. As with all Jewish holidays, there is food involved. Celebrating Rosh Hashana means matzo ball soup; brisket; apples and honey; and in my family, Grandma Addie’s delectably rich noodle kugel.

In Yiddish, kugel means “pudding”– and a sweet noodle pudding, or casserole, is just what this is.  Kugels can be sweet or savory, and have been popular for centuries throughout Eastern Europe.  In addition to noodle kugel there is also fruit kugel, potato kugel, and matzo kugel, all of which exemplify the adaptive ability of the Jewish people to transform pretty much anything into a tasty mix of artery clogging carbohydrates.

My grandmother’s kugel includes noodles, butter, sugar, and sour cream. It may not be the healthiest dish, but since we only indulge a couple of times a year, frankly we just don’t care. Of course recipes do exist on the internet that promise a healthier kugel by using artificial sweetener, butter substitutes, and light sour cream; to these I simply say, “FEH!”    If the kugel doesn’t congeal in the refrigerator, it’s not worth eating.  Which reminds me, it’s also good served cold, for breakfast, the next morning.  Trust me.

Since it’s her recipe, I’ll mention a bit about my grandmother, who was all of 85 pounds and maybe 5 feet tall on the days when she went to have her hair done. She was a tiny, fun, card-playing, ballroom-dancing spitfire of a woman who enjoyed decades of fatty foods and nearly a life-time of smoking until her death ten years ago at the age of 91. Which actually isn’t so surprising considering her own mother lived to her late 90s, despite a penchant for fried fat sandwiches (I kid you not).   I also credit my Grandma Addie (although somewhat embarrassingly) with handing down to me the talent – or life skill depending on your perspective – of how to identify an entire 2-pound box of assorted Fannie Mae chocolates by shape and swirl. (No, I never stuck my finger in the bottom of the candies, that’s just gross.) But I digress.

My grandmother’s kugel was always what my mother refers to as swimming in butter – I mean golden, bubbly butter oozing up the sides of the pan as it cooked. The first time I made it myself all that butter pretty much put me over the edge, so I started experimenting with using less. This noodle kugel recipe is nearly the same as my grandmother’s, except that I have cut the butter considerably and I must say, it is still a very rich dish.

Grandma Addie’s original noodle kugel lives on in the minds and cellulite of all who were privileged to indulge in its buttery sweetness around her holiday table. Perhaps it will become a tradition in your family, too.  L’Chaim!

Note: These quantities are for two 8×8 or 9×9 pans of kugel, or a single 9×13 pan.  Like my grandmother and my mother before me, I always use a glass baking pan. Why? Tradition! (see “Tevya; Fiddler on the Roof”).  I cut the recipe in half to make just one kugel, and if making two I freeze one for later. Or for the second day of the holiday, depending on how much gets left the first night. And makes it past breakfast the next morning. Oy.

Cook noodles until slightly underdone. Rinse in cold water and return to pot.

While noodles are cooking, in a large bowl beat eggs and sugar.

Bake for about an hour; finished kugel should be golden brown and crispy on top. If top starts to brown too soon, cover loosely with foil.

Allow to cool down to slightly warm or lukewarm; cut and serve. Store covered leftovers in refrigerator.