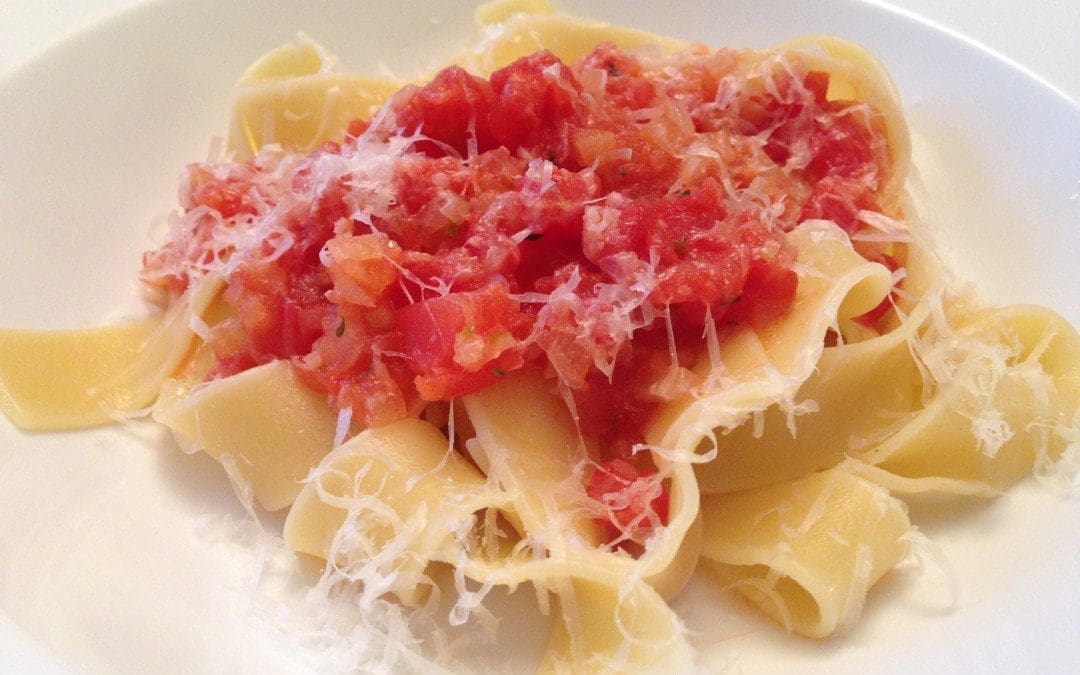 I’m combining my notes on these two recipes because one is really a variation on the other.

One of the most brilliant recipes of all time is Marcella Hazan’s Tomato Butter Sauce [no recipe even needed: put a can of whole tomatoes (28 oz.), 4 tablespoons of butter, and an onion cut in half (don’t peel it, don’t chop it, just plunk it in there) and simmer for 45 minutes.] and Kenji’s version seems inspired by it although requiring a few more steps.

The onion is diced then sauteed with butter and 2 tablespoons of olive oil.  There is also the addition of dried oregano, red pepper flakes and optional fresh basil.  Being the thrifty gal that I am I opted to use a can of diced tomatoes I already had vs. the whole ones called for in the recipe.  It was only later that I read Kenji’s side bar about the difference between the two, mainly that the diced ones “don’t break down properly when cooking.”  Fair enough.  You can probably tell from the pic that this is true.  Nevertheless, it was still a fairly tasty, relatively quick sauce that can be made from pantry staples.  I was a little put off by the diced onion however, and, if I made it again I would cut way back on them.  But honestly, I will proabably stick with Marcella when it comes to quick, easy red sauce.

For the eggplant version, Kenji employs a Cook’s Illustrated trick for drawing out a lot of the moisture before cooking.  You toss the sliced eggplant with salt and let drain for 30 minutes before pressing out additional water between two paper towels for good measure.  The eggplant is then sauteed separately until it achievs a yummy caramelization 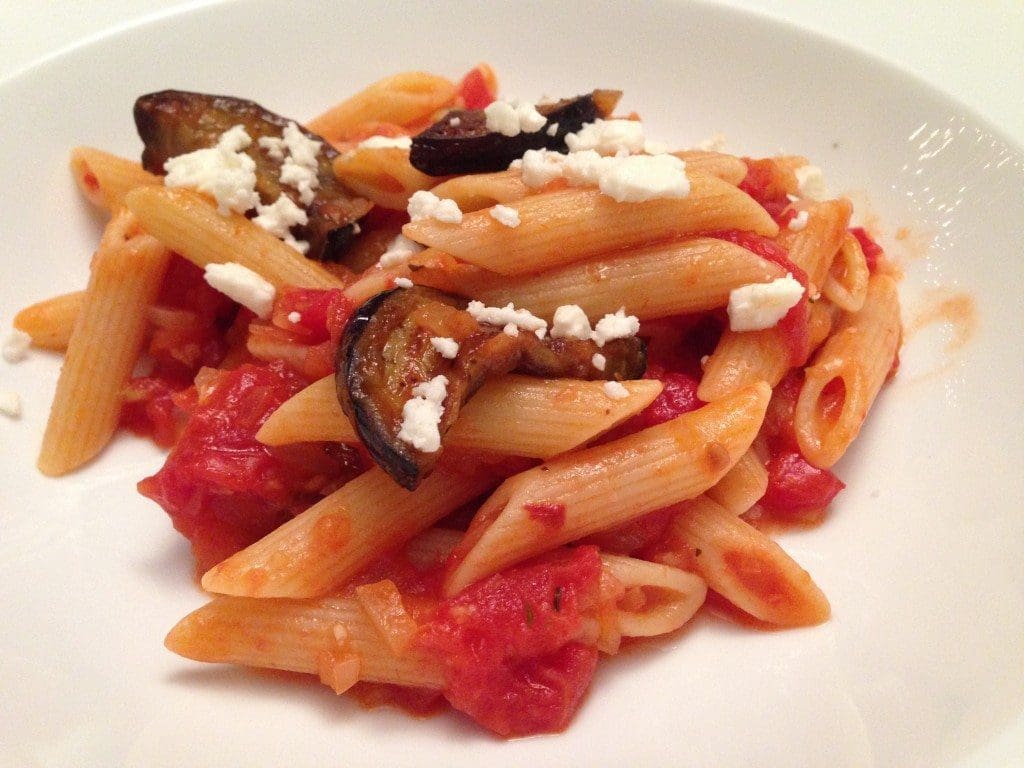 This time i used the recommended whole peeled tomatoes and it was noticably saucier.  Again, though, the onions bugged me.  Just too much.

I compared the recipe in the book to the one on SeriousEats.com and there are some interesting differences.  The eggplant is not pre-salted, it just gets thrown in a pan and sauteed in olive oil.  Even better: there are NO onions in the online version.  If I get the energy up to do this one more time I am going to try the online version for comparison.

The annoying thing with both of these recipes was that after reading no fewer than seven pages about how to cook pasta, there isn’t any clear directive on how to cook pasta, or if there is, I don’t have the patience to extract it.  Rather, it is seven pages of thesis-antithesis-synthesis on the subject of conventional wisdom surrounding boiling water and noodles.

All of which is to say, if I’m reading this right (and remember: I only have a BA so I might not be qualified to follow a Hegelian formula), you can cook pasta in much less water than you have been.

Someone fact-check me and see if i’m right.

Basically, cooking in less water produces more starch and makes better-tasting pasta and sauce.  Got it?  Buried in the 7 pages is the revelation that you can throw pasta in a pot with only enough water to cover by 2″, bring to a boil, kill the heat, cover and let sit and you will have perfectly cooked pasta every time.  If only he told us how long to let it sit.  I hope the rest of the book is not this frustrating.