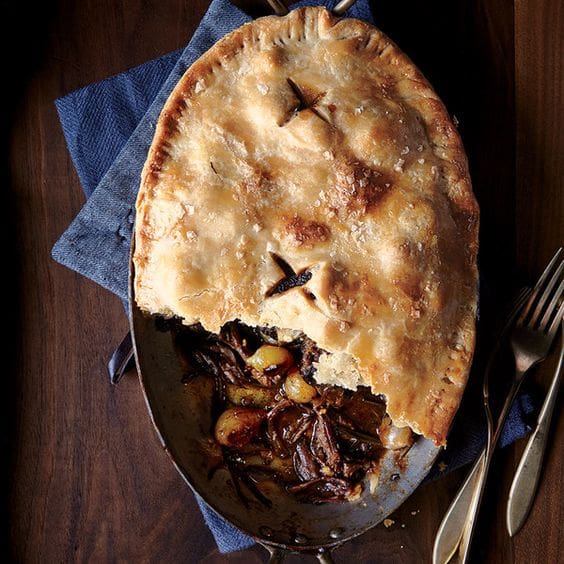 Photo by Gentl and Hyers

Why humble-brag when you can just straight out brag?  I kicked my own ass when I made this dish.  You know how they say if you can read a recipe you can cook?  I did that.  But first, I used my formidable powers of discernment to pick a recipe that was both promising and proven, brought to bear cooking skills honed over a lifetime, all executed with some serious tools and equipment.  So yeah, I followed the instructions. Very, very well.

Seriously though, you can too, it’s not difficult.  Many steps, a time commitment (a good chunk of it passive), and making pie crust, but nothing beyond the reach of us mere mortals.

I could not find boneless short ribs so I had to cut the bones out which is not difficult (unlike deboning chicken thighs OMG) but you will probably have to buy 5 lbs. with bones to get 3 lbs. without.  My only other beef (sorry, couldn’t resist) is with the pie crust.  Mine was dry and I will take the blame for that.  I should have added a little more ice water as it was coming together.  The dryness made it very difficult to get on top of the pot pie and then to fold under.  Fortunately no one was going to see that part so I got away with it.  But there is also way too much dough and my crust was a tad too thick.  I am also not a fan of Crisco but didn’t have time to search for lard so I used it.  Taking all of that into account, next time I will use my tried and true pie dough, which is from the Hoosier Mama Pie Company cookbook (here is a handy video demonstration with Paula Haney, including recipe). Or, use this crust but cut it in half and freeze what you don’t use.

Like any dish of this kind it gets better with age which makes a perfect make-ahead meal.  Even right out of the dutch oven though it is scrumptious and deeply satisfying.  I gave serious thought to making it in individual ramekins because I have a fondness for all things twee but I restrained myself because I wanted to serve it atop mashed potatoes.