The Complete Cooking for Two Cookbook: Chicken and Orzo with Spinach and Feta 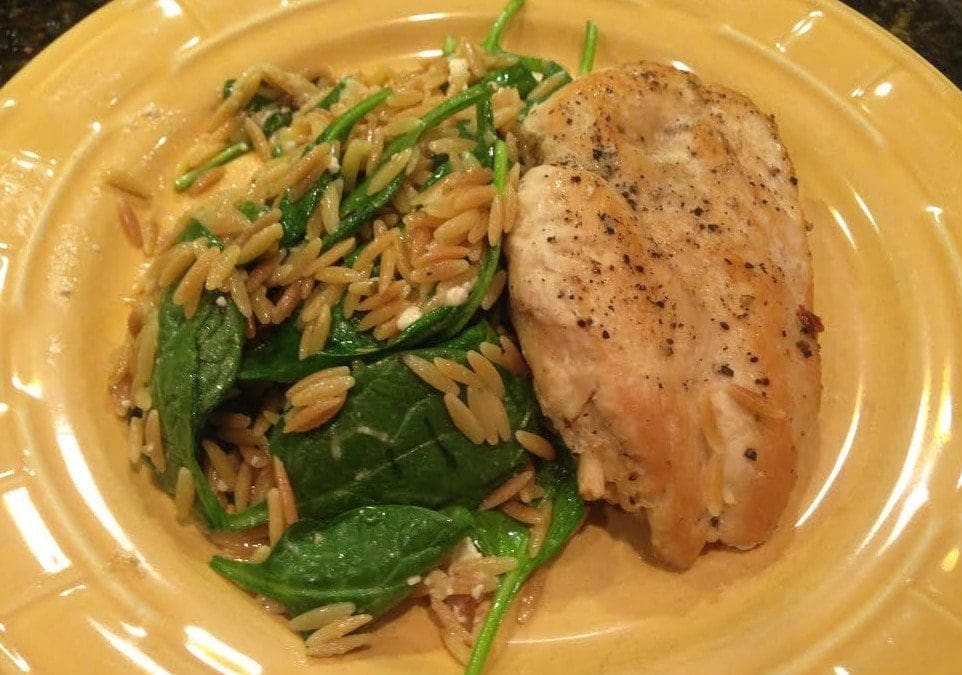 One of my favorite things about cooking is when I am surprised.  And given how much I cook, that doesn’t happen very often.  Disappointingly, I pretty much know what’s going to happen when I, for instance, saute a plain old chicken breast, which is to say: not much.

But hope is a thing with feathers and so is chicken.

Sadly, this dish only confirmed my formidable powers of culinary prediction.  And as much as I like to be right (and I like it a lot) I don’t like bland chicken.  It’s as if they left the next three steps off this recipe.

But this will give me the opportunity to remind you of an important step when cooking chicken breasts: make them even.  I usually put them, one by one, in a ziploc bag and pound the thick side into submission with a meat pounder.  Not too much, just enough so there is less inequality between the fat end and the skinny tip.  Otherwise the skinny tip will cook and become very dry while the thick part is still pink in the center.

The orzo, however, was delightful thanks large in part to toasting it in a dry skillet before adding adding the liquid and other ingredients.   And this was a quick, one-dish meal.

If I make this again I might cook the chicken then shred it and stir it back into the orzo at the end, making a kind of Arroz con Pollo.