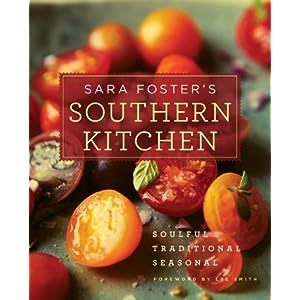 For one thing, this book kept popping up on lists.  Good lists.  Lists I trust.  First NPR’s “Best Simple, Summery Cookbooks” of 2011.  Then in the New York Times Book Review’s summer round up of of books.  Also swaying me: her previous cookbooks are well-thought-of by people who really cook.  Add to that the fact that I know very little about Southern eating, let alone Southern cooking, and it seemed like a great project.

Sara Foster started out catering with Martha Stewart and then opened her own catering business and, ultimately, two successful gourmet market/cafes in North Carolina.  This book, however, harkins back to her Tennessee childhood while taking a broader culinary view of “the South.”

Further intriguing is her contention that while Southerners certainly do love fried chicken and all things porcine, there is more depth and complexity to what is widely thought of as “Southern cooking.”  Being a cookbook of its time it is legally required to talk about “local ingredients” and “seasonal cooking” but that doesn’t mean that those aren’t truly important elements in the cooking of the South, and ones that we probably overlook when we (and I’m talking about those of us with little experience of the South) think of the region.  Or “regions” I should say.

But think about it: with a long growing season you would of course develop a tradition of making the most of what’s in season, and I envy them that, for sure.  We cram a lot into the brief time we can grow things here in Chicago and I often wish we didn’t have such a small window of opportunity.

In her introduction, Sara Foster describes a childhood centered around food traditions, special meals and a deep appreciation of things like sweet corn eaten in the field and warm tomatoes consumed like apples.  She calls it a “culinary utopia” and you can’t help but agree.  But appreciating tradition doesn’t mean stubbornly preserving it in every detail and Foster brings her professional culinary training and experience in to incorporate ingredients that, she admits, “my grandmother would say have no business being in Southern food.”  Today’s Southern cooks have evolved like the rest of the world; for one thing, Foster says that unlike her mother she doesn’t consider deep-fried okra a “green vegetable.”  This book, therefore, is an exploration and celebration of the old and the new; a way of keeping the best elements of traditional cooking while keeping it relevant with some thoughtful updates.

So get out your cast iron skillets and stock up on buttermilk and join me in the journey.