The Next Book: The Complete Cooking for Two Cookbook 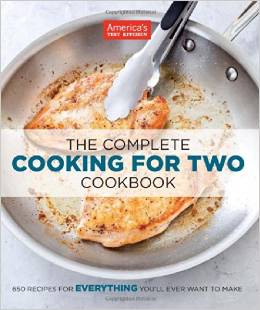 I fully agree with the premise of this book which is: scaling down a recipe is not necessarily simple math.  In other words, you can’t just divide all the ingredients by 2 or 4 to get the right sized meal for two people.  Why?  Because cooking is often about ratios and some elements of recipes, particularly herbs and spices, are more than the sum of their parts. And, as the authors point out, dividing an egg demands a dexterity few of us have.  Cooking times and temperatures are also tricky; a two-pound roast will not cook in half the time as a 4-pound roast.

There are other tips here for those who regularly cook for smaller audiences.  How to buy food when you’re not shopping in bulk (basically, don’t be overly swayed by per-pound deals; they are false economies if you end up throwing half away), and “How to Store Smarter.”  Lately I have come to understand the value of buying small.  For instance, olive oil will go bad relatively quicky after it’s opened, so unless you’re running a Mediterranean restaurant you’re probably better off buying small bottles.  All of this will also be extremely helpful if you’re working in a small kitchen and don’t want to store a 10-lb. bag of bread flour in your shoe closet.  (JK, of course I don’t have a shoe closet!  It’s more of a shoe province.)

So, as Steve Martin used to say, “Let’s get small.”