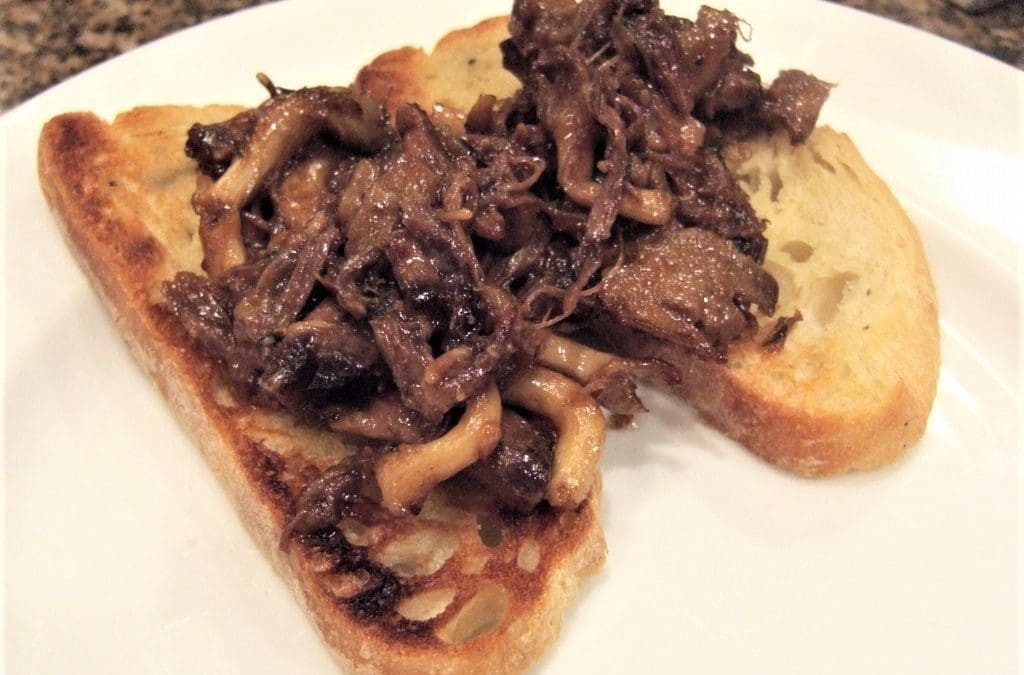 Another epic endeavor of a recipe beginning with 5 cups of beef stock. It really is important to make your own beef stock because there is nothing nearly as good as home-made on the market. Chicken stock, on the other hand, you can get very good canned (or boxed) versions of and I’m partial to Swanson’s Organic. But most prepared beef stocks taste tinny or fakey or just plain icky. So if you are making something that calls for a lot of beef stock, you really need to make it.

As you might suspect, Keller is not going to let you off easy on the stock. For one thing, you’re going to need neck bones which I doubt you will find at your local chain grocery store. Everything else is readily available but it will take you the better part of a day to get it done. You need to roast the bones, char an onion half, roast the vegetables, and simmer the stock for 6 hours. Of course it’s dark and delicious. You can freeze what you don’t need for the Oxtails as I did.  I will probably use mine for French Onion Soup.

For the Tartine, you braise the oxtails in a fairly conventional way. I love braises and I do them often but this one was tricky. After browning the meat and putting it in my dutch oven and cooking for 2-1/2 hours, I found that all of the liquid had evaporated and the meat had caramelized itself solidly to the bottom of the pan. I mean I could NOT get those suckers out! I rescued what I could and added a cup of my reserved beef stock to the pot and brought it to a boil, which released some of the meat and gave me the liquid I needed to finish the dish. I have no idea what went wrong, but next time I would either check my liquid at some point and add more or add more at the beginning. The other part of the Tartine is sauteed mushrooms and again Keller is vague about important things like how much oil to saute them in. I find it odd that someone who will go to so much trouble to source a teaspoon of chile powder from a specific region in Spain will often just tell you to “heat some canola oil.” Not fair!  Another important detail omitted is how much liquid you are supposed to have when the oxtails are done braising, or even how much meat you are supposed to end up with after removing it from the bones.

The Tartine was delicious and reminded me of an open-faced brisket sandwich. I fear that my picture doesn’t do it justice but just makes it look like some kind of un-made meat bed.  In the end though, this seems like a dish you make when you have leftover braised meat, not one you purposely set out to create from scratch. Would I make it again? Yes; the next time I have leftover brisket or something similar I will saute some mushrooms, mix in the beef and serve the whole thing on some really good toasted bread.

I served this dish with a very delicious, mercifully SIMPLE Spinach Salad with Frisee and Strawberries from Cook’s Illustrated.