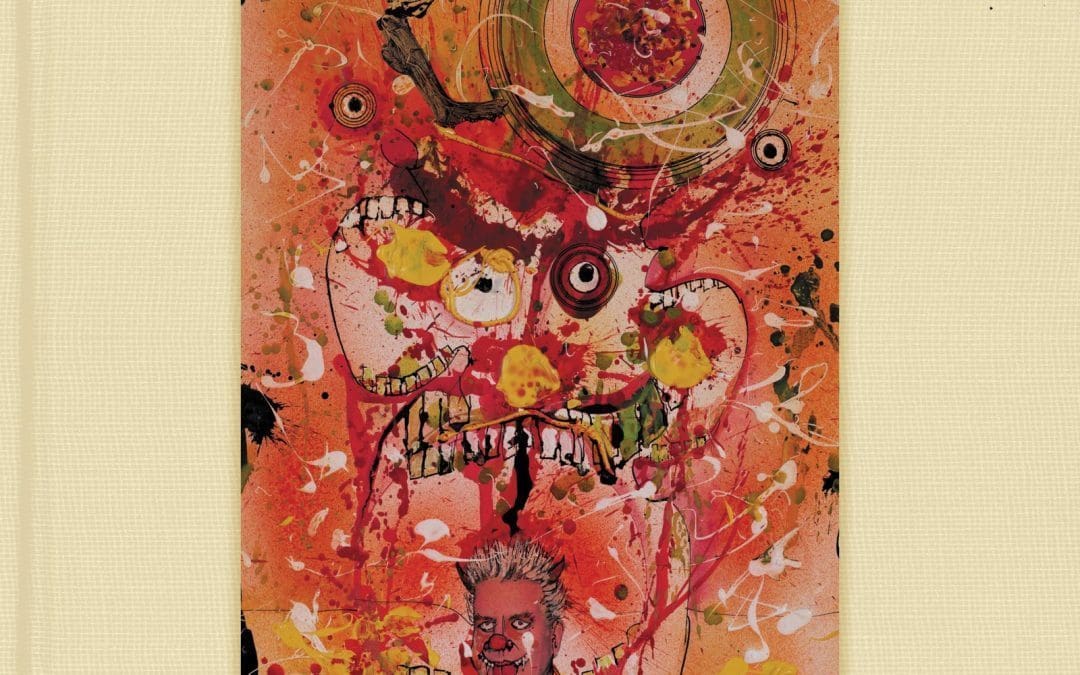 I’ve been a fan of Anthony Bourdain’s since Kitchen Confidential and I’ve always felt a little bad for him in that he’s gotten one of those super-sticky labels that famous people acquire (sometimes unfairly), in his case: “bad boy,” or “the bad boy of cooking.”  It must be maddeningly difficult to get people to see beyond that and I’d probably be driven to homicide by the inane and repetitive questions he must get asked because of it.

(Of course, this doesn’t help either.)

Yes, he swears and he smokes and he is irreverent about many things, including restaurants, celebrity chefs, club sandwiches, trendy ingredients, brunch, etc. But he’s also a very good writer and has a bracingly unsentimental point of view on all things edible. Like this: “Do not put ‘house-made chutney’ on my hamburger.  Please.  Let ketchup do its job.  And don’t make ‘house-made ketchup’ either.  Why would you do that?  If it’s not broken, as they say, why the fuck would you fix it?”  Indeed.

The book is a celebration of AB’s precious time with his family (wife and 8-year-old daughter) and is meant to chronicle the food he cooks for them and with them (as well as daughter’s best friend Jax and, apparently, Eric Ripert who seems to be under-employed and hanging out at Chez Bourdain a fair amount).  It’s an appealing and idiosyncratic collection of the food they like, either because of tradition or Proustian triggers or comfort, but also with many nods to local street food (Bodega Sandwich, Sausage and Pepper Hero),  New York classics (Chopped Liver on Rye) and global influences (Macau-Style Pork Chop Sandwich, Do Chua Salad with Herbs, Scallions, Sprouts, and Egg).

As you may have guessed, this is also another volume in a now well-established cookbook genre: professional chef strikes the I’m-a-busy-working-parent-just-like-you pose.  And in my experience, they are always at least a little deluded in that regard.  It must be their time in the restaurant world, with the walk-in fridges, easy access to obscure and high-quality ingredients, other people doing the dishes, and years of high-volume cooking that make cranking out several quarts of octopus stock a casual endeavor.  Or maybe it’s because they live in whatever the opposite of a food desert is, awash in exotic ingredients, twee farmer’s markets and specialty shops, all buoyed by a reliable current of disposable cash.  They think they are like us, but what I think is that a guy like AB is able to source bottarga (see below) with a tiny bit more ease than I am.

So recipes like Malloreddus with Wild Boar Sugo, that calls for two pounds of boneless wild boar with no substitute suggested, might be overly ambitious for most home cooks.  Even an empty-nesting woman like me, for whom cooking is my golf in that I’m happy to spend most of a day or a weekend doing it, is going to think twice before embarking on a wild boar hunt (the close up, two-page spread of a dead boar’s head somehow did not whet my appetite).  And if you want to go stark raving mad, try his Thanksgiving protocol which, I kid you not, proposes that you cook two turkeys: a “business turkey” and a “stunt turkey.”  Cute, but I don’t know anyone who is actually going to do this and I know a lot of people who will do insane things in the name of cooking.  Is Eric Ripert going to help me clean up after TWO Thanksgiving dinners? (because if he is I will totally do this).

Even the Pasta chapter, usually a reliable source for quick meals as well as projects, leans too heavily on the latter; in addition to the Wild Boar fantasy, there is Spaghetti alla Bottarga (which I had to look up because AB assumes we are familiar with it.  I will save you a google: it’s a salted, cured fish roe, and you may need to smuggle it into the US, so…plan ahead), Ravioli of Salt Cod with Lobster Sauce (and yes, you’re going to make the ravioli from scratch).  In all fairness, there is also an easy looking Spaghetti with Garlic, Anchovies, and Parsley, a Lasagna Bolognese (long but not extraordinarily so for a lasagna), Sunday Gravy (we’ll allow it) and a Macaroni and Cheese that seems straightforward.

I like a cooking challenge very much but there was too much of this going on in this book to tempt me to make very many of the recipes.  Roast Beef Po’ Boy was appealing until I saw that it requires you first spend 4 hours roasting a 5 lb. hunk of meat and which then needs an 8- to 12-hour rest in the fridge, and that seems backwards.  Don’t you make a roast to make a roast and then use the leftovers for sandwiches?  Am I hopelessly inside the box or is this ok with people?  The fact that it “serves 4, with plenty of leftover meat” also suggests that maybe the tail is wagging the boar.

But I did make a couple of recipes and with this very limited experience I concluded that what is not demanding in time, technique, or ingredients, is just not interesting (take him at his word when he says “There is nothing remotely innovative about the recipes in this book”).  The Sausage Gravy with Biscuits was fine but there was no gravy.  It’s just sautéed loose breakfast sausage finished with cream.  This does not make gravy, even if you add a lot more cream, as I did.  The biscuits were delicious but not better than ones I’ve been making for years. 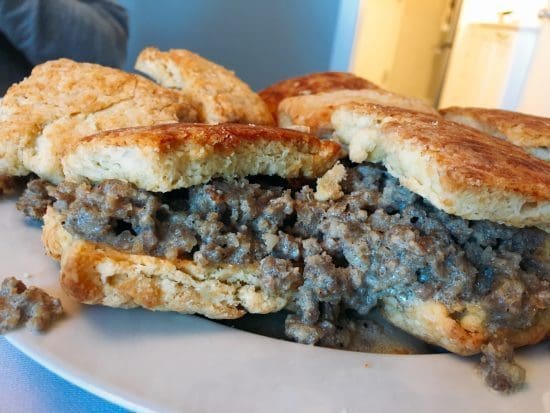 Do you see any gravy here? Me neither.

The Chicken Salad also makes good on the “no innovation” promise, although the faux sous-vide technique for cooking the chicken might be new to many and is worth knowing. I didn’t make The Grill Bitch’s Bar Nuts because it’s the same recipe found virtually anywhere online: nuts coated with egg whites and tossed with sugar, cinnamon and cayenne.  Putting the word “bitch” in the title somehow fails to make it interesting. 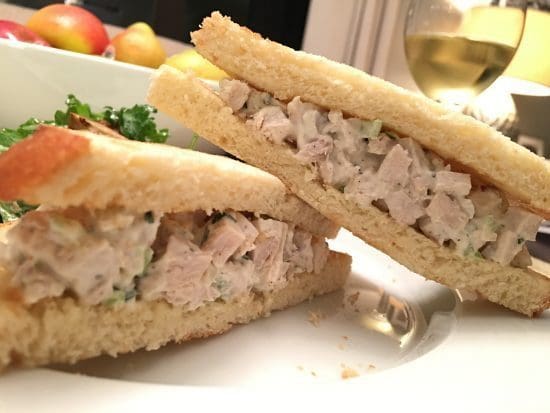 About the book design.  The cover art, by Ralph Steadman, mystifies me as to its relevance but hey, it’s Anthony’s book and he must like the guy so who cares, in the end.  And I guess the sprinkling of Ransom Font is meant to be…bad ass?  But the photos.  I get that they are probably intended to be provocative or disruptive or something, and that’s also fine, but often they are at the expense of being instructive or helpful or even appetizing. Why you gotta wreck Ripert? This makes me never want to eat again. Or stay in a hotel.

And this helps not at all 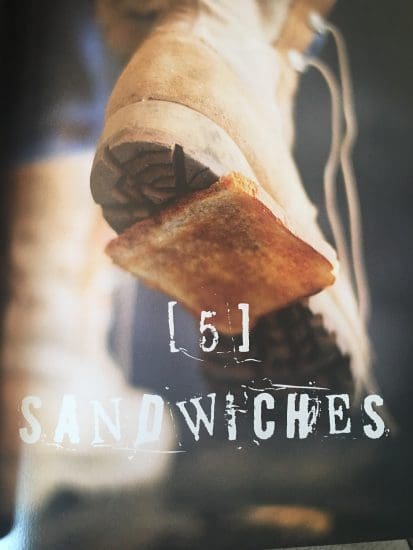 I am sorry that I did not feel inspired to make more and I know that that makes this an inadequate, and possibly unfair, review (in my defense, as Nicholas Cage says in “Moonstruck”: “I ain’t no freakin’ monument to justice!”)  I also believe that it’s the cookbook’s job to excite me and make me want to roll up my sleeves and dive in.  Appetites did not.