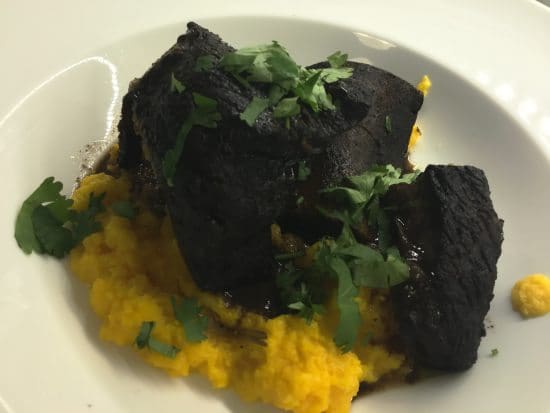 Who would eat that???  It looks like the daily special at the Carbon City Grill.

In my defense, I served this for a dinner party and my guests were waiting.  It’s one thing to make your significant other, child, mother, best friend, wait to eat while you get a perfect shot; they’re used to paying this quirky price to eat your food and presumably they love you in spite of your idiosyncracies.  But it’s quite another to make company wait – those people are gonna think you’re bonkers, what with all the re-arranging of bits of cilantro and turning the plate this way and that. So I rushed.  And when my pictures fail so definitively all I can do is copy the professional one from the website, with proper credit given ’cause that’s how I roll.

On to the meat of this post, pun intended.

I have lots of tips and tricks for throwing a dinner party without making yourself crazy or spending the entire night in the kitchen and some day I will write all that up for the betterment of mankind.  For now I will tell you that anything you can make ahead should go to the top of your recipe list.  Braised dishes, like this one, taste better the next day and refrigerating the liquid overnight has the added benefit of making the fat easy to remove.

This one was spectacular.  I needed it to serve 6 so I upped the quantity of meat to 5-6 lbs. and increased the carrots and parsnips to 1 lb. each; everything else I left pretty much the same except I added a bit more liquid in order to fully immerse the meat.

About beef broth.   I wish I were the kind of person who makes her own but I’ve been wishing that for decades so let’s just accept the fact that that’s probably not going to happen and get on with our lives.  Cook’s Illustrated taste tests have found that most canned beef broth is execrable and they often uses chicken broth in its place for that reason.  But they do like Better Than Bullion, a kind of concentrated beef stock base in a jar, so that was what I used.  Of course, if you are that person who makes their own broth you should use that and give yourself a hearty pat on the back!

Many people on Epicurious commented on how long it took the sauce to reduce so I was ready for that.  And I wasn’t looking for a super-thick sauce (per the picture — the good one, not my pic).  You should also note that if you cook this properly, that is, to the point where the meat separates from the bone, the meat will be separate from the bone.  I plated each serving with a piece of bone for the sake of presentation and will admit I felt a little dumb doing it.  But it looked good and nobody asked for their money back so I got over it.

I also fell in love with the carrot and parsnip puree.  Such a nice change from mashed potatoes and I got in-season veggies from the farmer’s market so they were exceptionally good.  I may not have cooked mine long enough as they weren’t getting to a consistency I would call “puree” with just the potato masher, so I put them in the food processor.  I also made them ahead and reheated just before serving, adding a bit more liquid and, truth be told, a promiscuous amount of butter and salt.

Of course, you could substitute mashed potatoes, polenta, buttered noodles, risotto, or your own favorite sauce-absorbing starch vehicle.  Oh, and your house will smell so delicious when you make this so don’t be surprised if your neighbors stop by to ask “what are you cooking???” with a look that conveys both naked hunger as well as a complete lack of dinner plans.