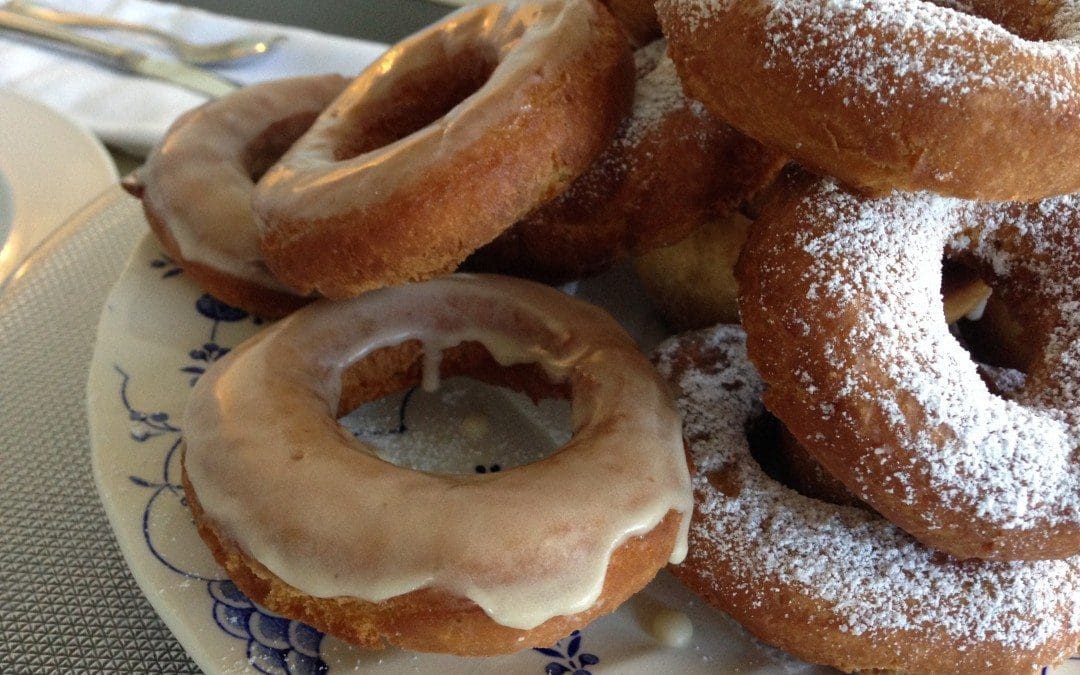 If I may quote myself: “never eat doughnuts you didn’t make yourself.” Such inspiring words to live by and I wouild certainly live by them myself if this damn place weren’t two blocks from my office. Oh, and as if that weren’t bad enough this finally opened near my my home.  First it was these adorable fringed booties stalking me around the interwebs and now the doughnuts are after me.

Nevertheless, I made doughnuts for my book group using this recipe from the October, 2004 issue of Bon Appetit. And they were fine. Not the best I’ve ever made (that would probably be the ones from Baked in the link above). I thought they were just a bit dry and lacking in flavor, which is surprising considering the inclusion of 1 cup of sour cream in the batter.

Following the tip of previous cooks I made the dough the night before, rolled it out and cut the shapes and put them in the fridge until the next morning. I skipped the streusal, also like many previous cooks, because it offended my highly-refined artisitc sensibilities and also I just didn’t feel like it. Streusal is for bundt cakes and other things that need help; doughnuts need no one and nothing.

Realizing at the last minute that I did not have maple extract for the glaze I used maple syrup and, as you might expect, the maple flavor was subtle to say the least. Some I just dusted in powdered sugar and then didn’t wear black.

There are two important factors to success with deep frying: achieving the proper temperature and having the right level of heat. I know they kind of sound like the same thing but here’s the difference: you can get to, say, 375-degrees over a low flame, a high flame or anything in between. If your heat is too low, however, it will take way too long for whatever you’re cooking to become crispy or golden or whatever level of food nirvana you’re out to achieve. During that time it will absorb too much oil and what you will have at the end is a pale, un-crunchy, oily mess. If your heat is too high your chicken or doughnuts will brown much too quickly on the outside leaving the inside either dangerously undercooked or batter-y. So yes, you need a decent thermometer but more important is knowing your stove and whether it tends to be hotter or cooler than most. I used to have a Viking (which I don’t recommend btw) and I knew the high BTUs meant that if a recipe said to cook over “medium-high” I needed to cook over medium.

The nice thing about making doughnuts is you have built-in testers called doughnut holes.

If you’d like to give these a whirl, you can find them right here.