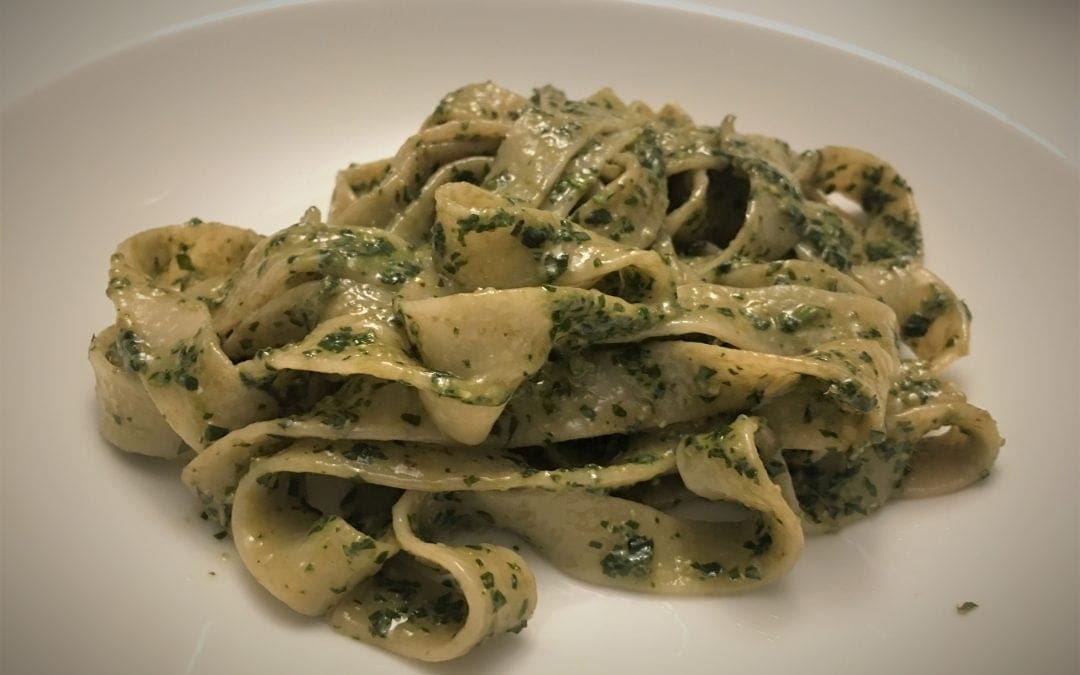 It seems almost impossible not to make pesto in the summer when bouquets of basil are everywhere, screaming “pulverize me and toss me with fettuccine!”  Before you know it we will be back to the tiny, pricey little boxes of the stuff so let’s get on it before it’s too late, shall we?

In their version, Milk Street was after the ever-elusive authenticity.  No more of the “potently garlicky, blandly oily and wanly herbal” pesto that’s been normalized here in the US.  So they went to the source –Genoa — where they learned that “true” pesto (which is not a category of sauces, oh no no, but this sauce only) can only be made 1. in a 100-year-old mortar and pestle the size of a baptismal font, 2. with the small and tender basil leaves found only in Italy, and 3. by an Italian.  Never, they said, NEVER use a food processor.  You want to make nonna cry with your blasphemy??

Several charming Italian towns and many veramente pesto dishes later (what a job these guys have, amiright?) they concluded that yes, pesto is best made the time-honored, grandma-blessed way (mortar and pestle), but with a careful re-thinking of the order of ingredients and a judicious use of the dreaded food processor, we can approximate it here in the good old land of Olive Garden.

And this was yum yum yum.  It was, indeed, creamy and balanced — basil-forward as a waiter might say when he sells you a plate of it for $24.

The cheeses, pine nuts (UNtoasted), garlic, oil and salt are pureed first and I did this earlier in the day.  Roughly chopped basil is added at the end and minimally pulsed so as to leave nice flecks, and a little more oil is added at the very end.  It is finally spooned over hot pasta with some of the cooking water added to distribute the sauce.

I bought armfuls of basil at the Green City Market and, as I’d read somewhere, put them in water like fresh-cut flowers to preserve for a few days.  I was grateful they listed both cups and weight for the basil since I’m never 100% certain what “5 cups lightly packed” looks like.

The recipe yields 1 cup of pesto for 3/4 lbs pasta but doesn’t tell you how many servings it is.  I needed to serve four so increased everything by 1.5x to sauce a full pound of pasta (tagliatelle).  Of course I could not find the pecorino Sardo so used their suggested substitute, Manchego.  Turns out we had leftovers (maybe because I over-sold the Peach-Blueberry Crisp I had made for dessert), so you are safe making it as written for four.