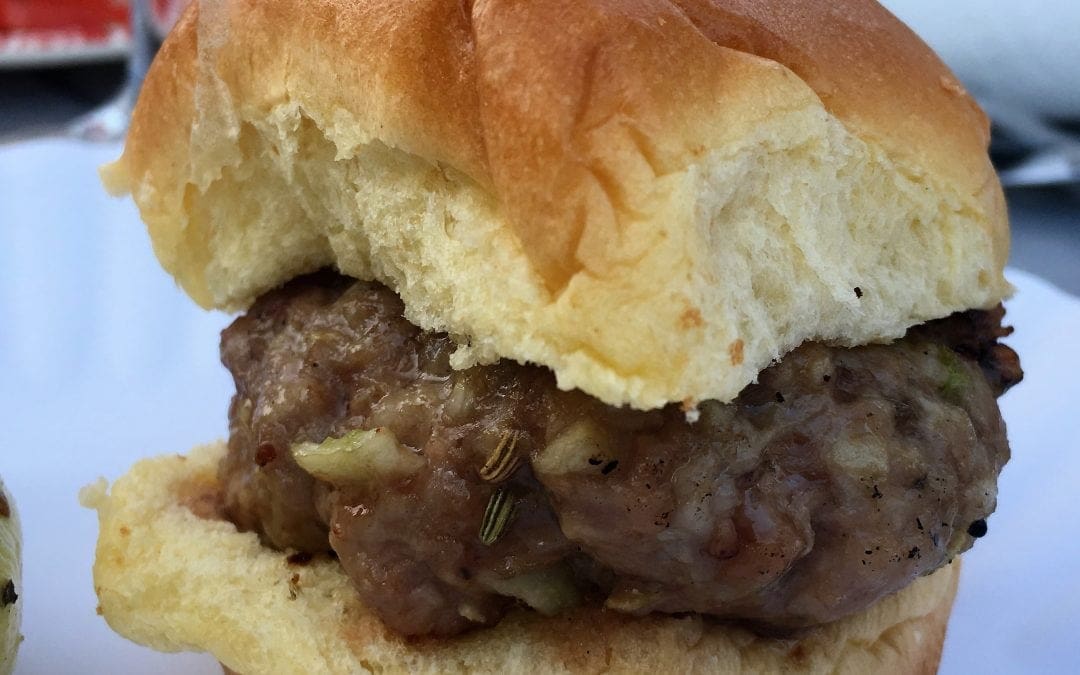 As delightful as grilling is (and short-lived for those of us who live in colder climes) there might come a point in the season when you feel like you’ve done it all.  You’ve ventured beyond hamburgers, brats and steaks to beer-can chicken, peaches, beef satay, and maybe way into the realm of watermelon with smoked salt and jalapeno rings, avocado toast, unicorn kebabs — whatever Kenji Alt is dreaming up — and you are hungry for something new.  These wonderful burgers might be the change you’re looking for.  And you don’t even have to grill them.

I made them as “sliders” and served on brioche dinner rolls because small things are cute and fun and you can eat several of them and still delude yourself that because they’re diminutive you have really only eaten, like, 3/4 of a regular burger.

It wasn’t until after I made them that I watched the accompanying video and noticed a few departures from the written recipe.

First, the list of ingredients calls for “2 ½ pounds boneless pork shoulder, with some of the fat, cut into 1-inch cubes.”  To me that meant cut up some nice, marbled pork shoulder and don’t remove the fat.  In the video Mark has segregates the meat from the fat and grinds them separately.  I assume the fat grinds faster so you will get more consistent results doing it in two steps but from my experience you can do it all at once and suffer no consequences.

For the fennel, the recipes tells you to “pulse until just chopped” and I did think this made the pieces a bit too big.  In the video Mark goes for more of a dice or a mince which will give you a more cohesive burger and more integrated fennel flavor.

He also does not use the amazing garnishes when he assembles the burger in the video.  I used three of the optional ones — parsley, olives and roasted red peppers (from a jar) — diced and mixed them together to make a versatile relish that was perfection on these burgers.

Last thing about the video: I watched him flip his burger, in a nonstick skillet, with a metal spatula and now I’m dead.  I know he doesn’t have to worry about the life-span of the equipment in the New York Times’ kitchen but the rest of us do.  Friends, only silicone or wood utensils in your nonstick!