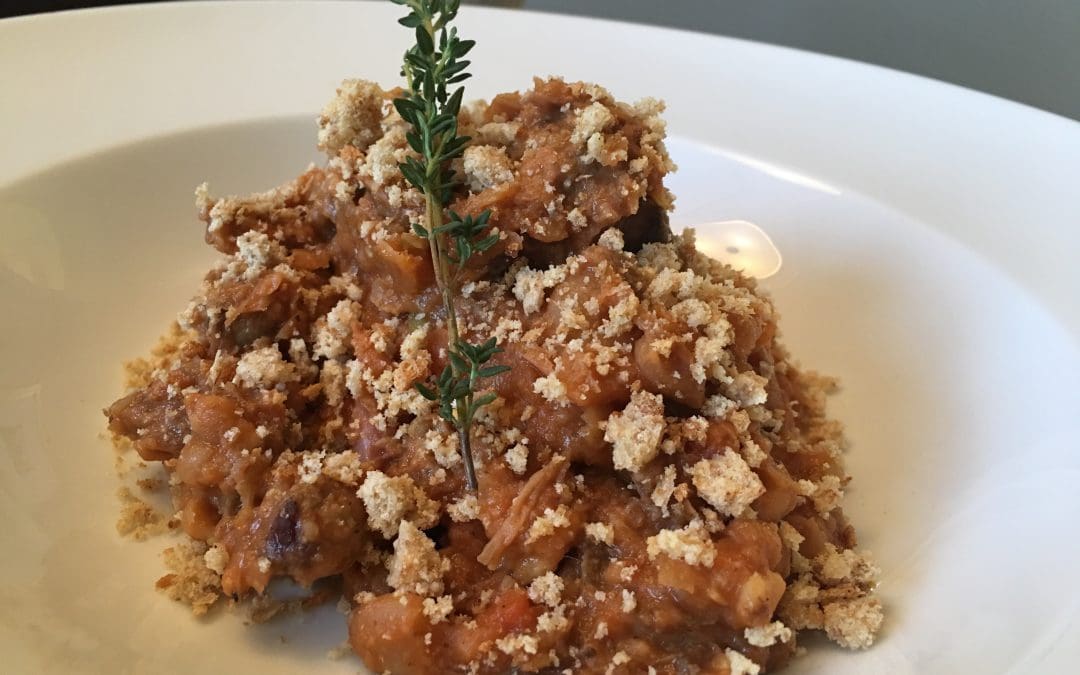 Earlier this year, Melissa Clark published The New Essentials of French Cooking in the New York Times and I took it as a personal challenge from Melissa to me.  To which I said, out loud in my home, like a boss “game on Melissa. Game on.”

And why not start with the recipe that is the most challenging, time-consuming and doom-prone: the formidable cassoulet.

This is an old dish, a traditional dish, an iconic dish.  So fighters gonna fight about it.  Among the controversies: the proper way to prepare it, authentic vs. blasphemous ingredients, and most important, which region can lay claim to it.  But doesn’t every culture has a dish like this?  One that takes sad bits of meat or fowl that might, save for being cooked for a long time, be inedible or at the very least tough to chew, enhanced and expanded by an inexpensive starch (noodles, rice, beans), and whatever else is handy like the last of the carrots, a dented onion, garlic, etc.  Throw in some handy herbs — thyme, cilantro, oregano — and voila, twelve hungry souls eat for another day.

And why do it at all if I’m not going to do it right and seek out the very best ingredients, including making my own duck leg confit.  I ordered the components from the wonderful D’Artagnan well ahead and had my duck legs underway about 3 weeks before my dinner.  Which brings me to my first note on the instructions for the recipe: although the notes for this dish encourage you to make your own duck confit, they are somewhat vague merely saying “cover completely with fat.”  Mes amis, it takes A LOT of fat to cover four healthy duck legs. I had only ordered two 7-oz. containers from D’Artagnan and it wasn’t nearly enough.  I ended up adding the remains of half a bottle of olive oil and vegetable oil I had on hand plus about 1 cup of bacon grease I had in the fridge. (I have since heard that you can also get duck fat at Whole Foods).  D’artagnan also offers a complete cassoulet kit that you may want to avail yourself of to save the ingredient-hunt.

In pursuit of cassoulet perfection I landed on Rancho Gordo beans, purported to be the best by people who know: the New York Times, Wall Street Journal, Los Angeles Times, Bon Appetit, Gourmet, Food & Wine, Saveur, blah blah blah everybody loves them.  Sadly, this was one of the great disappointments of this dish.  Despite soaking the beans overnight, per both this recipe and every other recipe I’ve ever read for dried beans, they cooked up unevenly, some turning to mush while others remained stubbornly tough and dry.  I emailed the company and their response was “we do not recommend you soak and if you do soak, no more than 4 hours” (they also nicely offered to send more beans for free).  I kindly replied that that was good to know but contradicted information on their package as well as their website.  In response they sent me their “basic bean cooking guide” which, confusingly, says to soak the beans for 4-8 hours.  I know I only have a bachelor’s degree so I may be out of my intellectual depth here but I think we’re still talking about cooking beans so I stood my ground and emailed back pointing out the discrepancy.  Yes, I was now in an email fight with a Napa Valley bean farm, qualifying me as having the Firstest of First World problems. Bottom line: you do not have to soak their beans, but if you do, do not soak for more than 8 hours. In retrospect I wish I’d taken Cook’s Illustrated’s advice on using canned beans as they’d found in a recent taste test that they far exceeded dry for exactly this reason (uneven and unpredictable cooking).  Next time.

I did not have much trouble finding the remaining ingredients except I used breakfast sausage links for the fresh pork sausage which I don’t recommend as they lent a beanie-weanie appearance and it was not a good look.  Another issue is that the list of ingredients calls for “1 pound” of these sausages but when it comes to assembly tells you to “place two” of them on the first layer, when they really mean half.  I had the good fortune to have some wild turkey gifted me by someone who actually killed it with a gun (and this may be the first time this city girl has ever eaten anything shot by a person I know so put that one in the books) so I used that in place of the lamb stew meat.

I timed my preparation so that I would complete the cassoulet on the day before my dinner in order to both give the flavors time to meld as well as to leave the day of free for other last-minute prep and the rest of the menu (see below).  That meant soaking the beans and seasoning the meat two nights before.  On the day of the dinner I removed the cassoulet (in the dutch oven) from the fridge about an hour before cooking to take the chill off, then started cooking about 2 hours before my guests arrived.  Right away I had a problem in that the breadcrumb topping was browning way too fast, so I put the lid on for the last hour of cooking.

The beautiful video that accompanies the recipe is quite helpful but ends before the somewhat awkward point of meting out individual servings.  It is not a simple matter of ladling gorgeous, steaming spoonfuls into beautiful, rustic individual dishes (accompanied by a vaguely French jazz soundtrack), because remember that you have four duck legs, and, ideally, four large sausages.  These must be dealt with somehow so that everyone gets a bit of everything (Egalite! right??)  Furthermore, the breadcrumb topping is not easily transferred to each serving as in the photos accompanying the recipe (and remember, this is toasted bread drizzled in duck fat so you Do. Not. Want. To. Miss. It).  Fortunately I had toasted some extra breadcrumbs separately and was able to garnish each dish.  The photos also show some bowls with a whole duck leg and some without; given that this serves 10-12 people, that means 6-8 would get no duck.  I would not want to sit next to them.

My guests seemed to enjoyed this dish, in fact there was an actual Frenchman present who is familiar with cassoulet from one of its claimed regions of origin, who said that the very smell was bringing tears to his eyes (bless his heart!).  He was also gracious enough to supply the wine served with the main dish: a 2013 Chateau de Cedre Cahors from Toulouse, one of the regions that claim the dish’s origins.  But I am my own harshest critic (I hope) and there are things I would do differently were I to attempt this again.  Including:

Here is the rest of the menu along with the wine pairings; keeping in mind how substantial the main dish was I opted for “lighter” accompaniments: 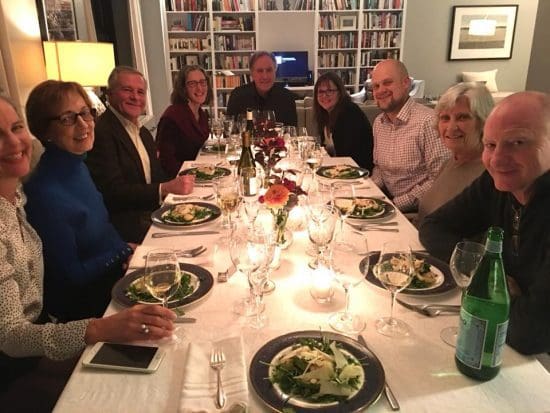