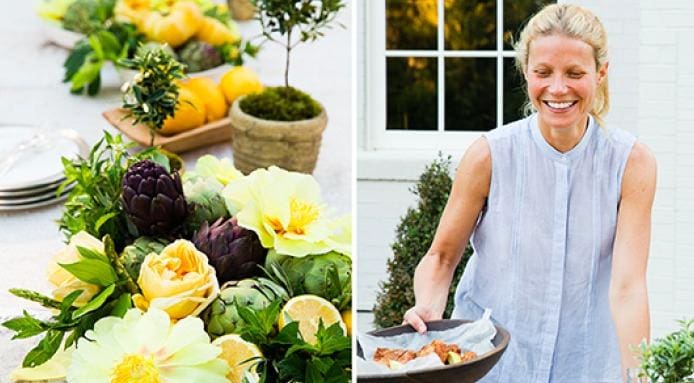 So we all know that the world’s reaction was to a cookbook by Gwyenth Paltrow, star of stage and screen (large and small), hopelessly blond and thin, child of bi-coastal privilege and mother of what I think we’re all just assuming are children (think about what a good name “Apple” would be for a pet pot-bellied pig).  It was something along the lines of “Make it stop.”  And that’s the polite version.

I know the poor woman must have some fans.  Even Momar Quadaffi has has people fighting on his side, for crying out loud.  But the supporters were drowned out by a highly-vocal hating faction who either have faster internet connections or just find Ms. Paltrow and her cookbook to be the number-one global threat of 2011.  Her appearance, as the first non-food item, on the cover of the June Bon Appetit only squirted more lighter fluid on the flames of outrage (“Surely, no one believes she had anything to do with the book beyond slapping her name on it” read one Facebook post; “GP makes me lose my appetite” said another). And my friend Mo, who was won over by Gwyenth’s Veggie Burgers, finds pictures like this to be just really damn annoying: 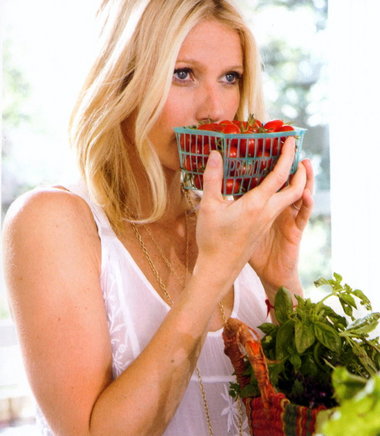 (And I see her point: why do we need a photo of Gwyneth apparently rehearsing a love scene with her cherry tomatoes in what appears to be a nightgown?  I will take the high road and assume that her publisher insisted this would move more paper.)

But my reviews are of cookbooks, not acting or singing or personalities.  I am not interested in whether a cookbook author is entitled or “condescending and pretentious,” a “silver-spooner” or even speculating on the exact nature of her presumed eating disorder.  She has presented a collection of recipes and that is what I am interested in.

And they’re good!  Revolutionary, not so much but I think for the vast majority of cookbook buyers, a collection of relatively easy and interesting recipes for weeknight as well as celebrations is useful and necessary.

And to perhaps dispel some of what I think is driving the disgust, let me tell you that she does not pretend that she is like you and me.  She says she likes to cook for her family but never suggests that she walks in the door at 6:00 every night and has to get dinner on the table in the midst of dogs and children wanting attention and the phone ringing, all in time to get to a basketball game, or a recital or get upstairs and blog for pete’s sake.  She just likes to get into the kitchen when she can and cook things that she and her family enjoy.

And here’s another thing: she is not didactic about her (sometimes kooky) food preferences and beliefs.  For instance, she has somehow arrived at the principal that she can eat poultry and fish, but not pork or beef because the latter are produced in an inhumane way in this country (as well as, I presume, the UK where she spends her school year).  From what I understand a person, especially a person with with some (ahem) resources, can get pork and beef that has not only been raised in a humane way, but they can get it from a farm they know.  I would suspect at this point you can go on Match.com and find a farmer who is looking for carnivores interested in developing a deep and enduring agri-business relationship.   The distinction, as far as I know, is not between the type of protein but rather where you get it.  Nevertheless, I’m not going to engage in a one-sided debate about food politics with her.  The point is: she doesn’t care if you eat beef or pork, even if it’s produced by cramming the animals into airless pens and applying toxic make-up to them on an hourly basis.  She uses duck bacon but she says “use whatever bacon you like.”  Same thing with Veganese, thank God.

Despite the fact that I will (probably) never be a tall, thin, blond, wealthy multi-talented star (although it’s not over yet, is it?  IS IT?) we do have some things in common.  We both enjoy the process of cooking, we’d prefer to feed out children un-processed, homemade foods whenever possible, and we like to gather our loved ones around our table.  (As it happens, I also enjoying sniffing cherry tomatoes while wearing gauzy white gowns.)  So I appreciated adding recipes like her flavorful White Bean Soup, ridiculously easy Homemade Veggie Burgers, satisfying Chicken and Dumplings, surprisingly yummy Kale Chips, revelatory Homemade Turkey Sausage Patties, and magically delicious Lalo’s Famous Cookies to my repertoire.

And I think you will too.